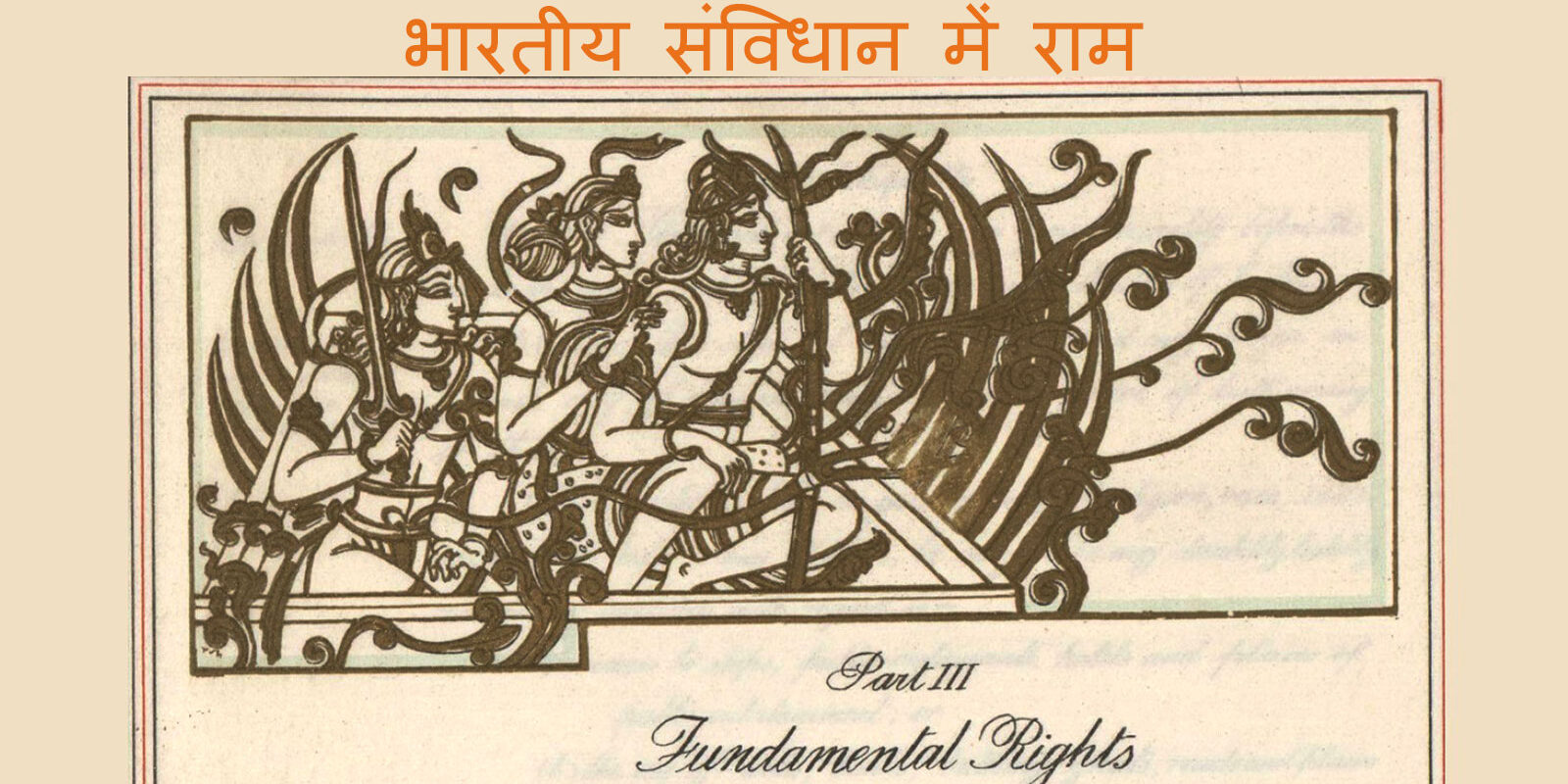 Why India needs a ‘Second Republic’?

What comes to our minds first when we hear the word REPUBLIC? Some sort of ruling mechanism, to put it in a very simple and lay-man’s term, no?

Yes, you got it right. The dictionary meaning of REPUBLIC is, ‘a state in which supreme power is held by the people and their elected representatives, and which has an elected or nominated president rather than a monarch’.

The archaic meaning of REPUBLIC states that a group with a certain equality among its members.

The KEY WORD here is EQUALITY; please do keep that in mind.

The idea of ‘India needing a second republic’ first germinated in my mind in 1994 when I first got to know that today’s France is called FIFTH Republic as it adopted its fifth constitution, in 1958, 13 years after the Second World War. But, then at that time it was just a thought which came to my mind and went away, just like that.

India implemented its constitution on 26th of Jan 1950 CE and became the first republic, in the backdrop of a bloodied partition and a long awaited independence. With baggage like almost 200 years of colonial rule and the Act of 1935, the constituent assembly of India was formed in the fag end of 1946.

Now, the members of constituent assembly were obviously not elected by the universal suffrage[1] for forming the constituent assembly, and even though they tried best of their ability, they had a ready-made format of 1935 Government of India Act to ‘take inspiration from’.

Not going into a detailed analysis of our constitution point by point or rather ‘article by article,’ there are 3 acts in our constitutional system which forced me to think actively about the possibility of second republic. Let’s have a look at:

Imagine the plight and situation of the inhabitants of a country whose majority population follows a DHARMA where all their gods wield arms but the public is prohibited from possessing or carrying it!

In the backdrop of the first war of independence, the British, to disarm Indian populace , brought the arms act which is better known as the Arms Act 1878 which was nothing but the consolidation of the earlier acts brought by them.

The first comprehensive arms legislation in India was Act 28 of 1857 enacted on 11-9-1857. This Act was a temporary measure, and it only regulated the import, manufacture, sale, possession and use of arms for two years. It was passed when ‘the mutiny’ was still going on, and it was a hurriedly drafted law with the obvious aim of seeking to put down the revolt. The Act of 1857 was replaced by Act 31 of 1860. This later Act differed from the 1857 Act in two important respects –

(2) It prohibited the purchase of arms and ammunition from unlicensed persons.

The Indian Arms Act, 1878, was intended to disarm the entire nation. Even after independence, the law declaring ‘swords daggers, spears, spear-heads, bow and arrows’ as ‘arms’ has been allowed to continue unaltered on the statute book. The rigours of the Arms Act and rules stated in that Act continue to make it difficult for law abiding citizens to possess firearms for self-defence whereas terrorists, dacoit gangs and other anti-social or anti-national elements are using not only civilian weapons but also bombs, hand-grenades, Sten guns, 303 bore service rifles and revolvers of military type, for perpetrating heinous crimes against society and the State.

Unfortunately, the position in our country today is that the resources with law and order enforcing authorities are inadequate to provide adequate protection to the citizens. The result is that the decent, respectable and law-abiding citizens are defenceless if a gangster or criminal enters their house with a weapon, or accosts them elsewhere. If criminals enter a house with weapons, they can loot, violate the women, and do as they please because an unarmed person cannot be reasonably expected to put up resistance against a person carrying a gun or revolver. If, on the other hand, one has a revolver or pistol with him, he can put up resistance against such criminals.

In my opinion, if the Arms Act is interpreted in the manner indicated hereafter by me, crimes will go down and will not go up as some people think. Situation now is that the criminals are armed with licensed or unlicensed guns, whereas the law-abiding citizens are not easily granted an arm’s license, and thus they are at the mercy of the criminals.

To prove my point, here are few data on the gun crimes in India (data given is till 2016 from www.manifestias.com): 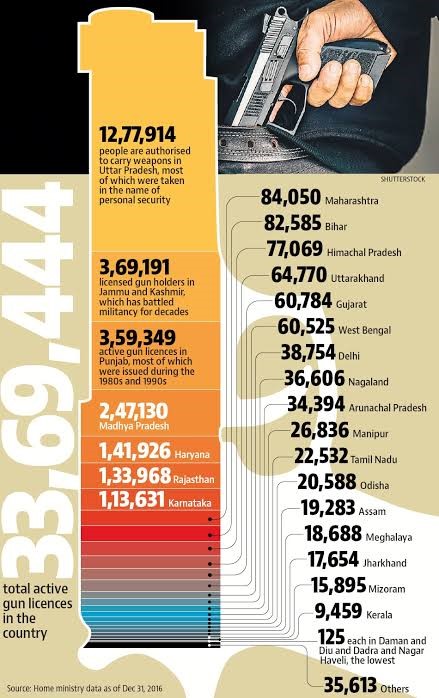 Looking at the India’s population and number of gun licences, it stands out that the policy of keeping Indian People disarmed, continued even after the independence. This policy must be done away with, immediately.

The farce of EQUALITY, which is very prominently, talked about in Indian constitution, not only in its preamble but also in many of its article viz. Article 14, Article 15, Article 21 and Article 25 comes out in the open when we see the HR & CE Act controlling the temples and religious places of Hindus only by the same constitution.

The HR & CE Act, which we see today, is a developed and amended form of the MADRAS HINDU RELIGIOUS ENDOWMENT ACT of 1923, which was passed in 1925. It went through many changes by amendments brought in the years 1927, 1935, 1938, 1944 and 1946 with the sole aim to consolidate its powers to take over and administer temples. Of course, this abominable and despicable law by government applied only to Hindu Institutions.

One very important aspect to touch upon while talking about this act is the concept of SECULARISM. It is important & interesting to note that there is no agreed, accepted and precise meaning of secularism in India. The general perception of secularism is ‘opposing Hinduism’.

There are two basic propositions of Secularism as a modern political and constitutional principle – The first being, people belonging to different faiths and sects are equal before the law, the constitution and the government policy. The second proposition states that there can be no mixing up of religion and politics.

The Sūkti in Sanskrit ‘सर्वधर्म समभाव’ is the most appropriate Hindu vision for any state and/or society wishing/willing to be a truly secular state but dear readers, please bear in mind that the word ‘SECULAR’ is not defined or explained in the constitution adopted by India, neither in 1950 nor in 1976 when this word was added in the preamble of this constitution, unconstitutionally.[2]

On top of that, the HR & CE Act deprives the Hindu temples of the funds, which are donated by Hindus and practicing Hindus. These donations are given for the welfare, maintenance and proper functioning of temple or the religious institution as prescribed in our religious texts like ‘आगम’ but this act gives tremendous powers to government to not only strip the temple of its money and use it elsewhere but also to meddle in the day to day affairs of running the temple and its daily prayers. A clear example of mismanagement of temple fund is given below:

The above data from 1997 to 2002 of Karnataka Government shows the misappropriation and mismanagement of temple funds while keeping the temples, from where they took the money, bereft of the contribution they would have made to the Hindu society with that money.

Ideally, the law of the land must be common and uniform throughout country across all states and union territories for all its citizens, but that is not the case in India. It has different sets of law for the religious minorities[3] and different laws for the Hindu Majority. The fact that HR & CE Act is not uniform across the country is a case in point. In a secular country, which should have equal rights and respect for all its religions, how come the state has control of only Hindu temples and not other religion’s worshipping places? How come the HR & CE Act is adopted and applicable only in some states and not in some other states?? So, automatically, the question arises whether HR & CE Act is even constitutional???

The RTE is a perfect example of that proverbial ‘poisonous sugar pill’ which looks good, tastes good but kills you in long run.

Agreed, it was with good motive, with good intentions as it aims to:

But, here lies the catch. On May 7, 2014, the Supreme Court of India ruled that Right to Education Act is not applicable to Minority institutions as it will infringe upon the rights of minorities provided under Article 30(1) of the constitution!

Now, let’s stop for a moment and think about the implications of this judgement. The minority institutions are exempted. So, the 25% quota is applicable only either in the government schools or in the schools run by the majority, i.e. Hindus. The cash inflow (as fees and other income) to these schools will be reduced by 25% but the cash outflow will either remain the same or increase every year due to inflation, increased salaries and other expenses. I am not sure about the government reimbursing the private schools, so, for the moment let’s leave that point.

Now the ramification of this action is that the management will –

Now, let us consider, for a moment, the reimbursement for the 25% quota from the government. We all know how easy(?) it is to get money from government with the process being so cumbersome, tiring, time consuming and requiring so much of paper work!

In all the scenarios mentioned above, it is a loss for majority community as either there will be extra financial burden on them in the form of increased fees or they will be compromising on the quality of education due to the change in management and/or status of the school or facing the prospect of that school being shut down in the due course of time.

I have mentioned just three Acts of Indian constitution but if we analyse various legislations, which are in vogue in our country, we would find that many of them are not in accordance with the said concept of equality and ‘Secularism’. Take for example, section 494 of IPC. Under this section, bigamy is an offence and a person marrying second time while still being married to his first wife is guilty of the offence. But, this provision is not applicable to a person who is permitted to have more than one wife by his religion. Not only that, Article 30 provides that all minorities, whether based on religion or language, shall have the right to establish and administer educational institutions of their choice but the same constitution fails to provide a clear-cut definition of the term ‘MINORITY’.

Another example of inherent discrimination can be found in THE PROTECTION OF WOMEN FROM DOMESTIC VIOLENCE Act, 2005. This Act discriminates on the basis of sex. It is not a government’s job to peep in the bedroom of its citizens. Similarly, the imposition of Hindu Marriage Act on Hindus only but leaving all other faiths out of it is another example of discrimination based on religion.

This present constitution, by the virtue of still being ‘BRITISH’ in spirit, as many of the colonial, archaic laws are still prevalent, enhances ‘CRIMINALITY’. Many tribes and castes were notified, during British rule, as criminal tribes under the ‘Criminal Tribes Act of 1871’. There are many castes and tribes still waiting to be ‘de-notified’ and the worst case is that they are not eligible for getting the benefits of reservation!

[1] The members of Constituent Assembly were elected by the provincial assemblies by a single, transferable-vote system of proportional representation.

[3] ‘Minority’ is not defined in constitution. To know how a community is declared minority, this articles may be seen –
Minority अल्पसंख्यक कौन हैं? भारतीय विधि विधान का सच